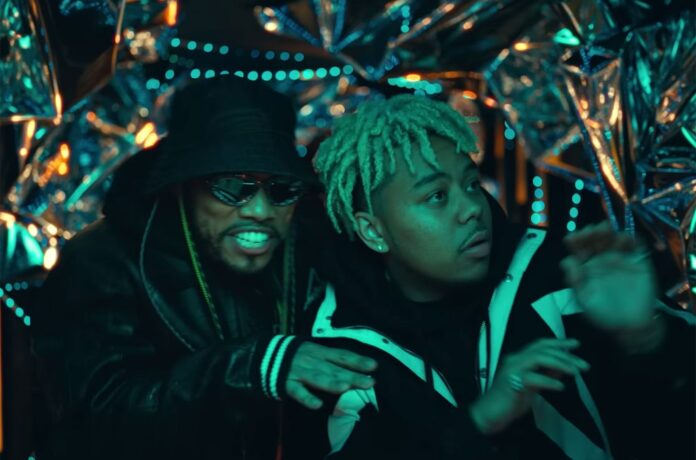 Cordae and Anderson .Paak are a dream team on “Two Tens” — kind of.

The “So With That” rapper released the new track Wednesday (Jan. 25), but the flashy video sees .Paak soaking up all the attention that comes with new girls in his orbit, while Cordae ponders if the extra attention, time and money required is even worth it.

The video sees Cordae pulling up to a club where he meets the Silk Sonic member, something that he didn’t necessarily want to do in the first place. “Me and my n—a Anderson decided to pull up to the club, and I don’t even like going out, but if my n—a tell me pull up, I pull up easy, you know?” the rapper narrates the video before officially launching into the sleek visual.

The J. Cole-produced track, which borrows elements from ’90s-era hip-hop in the instrumentation, tells a story, with Cordae attempting to be a voice of reason for .Paak, who can barely control his excitement.

“Man, I love this b—h/ We gon’ travel and fill up the bucket list/ Have ’bout 10 kids on the ranch on some southern sh–,” the “Leave the Door Open” singer spits, infatuated with a girl who showers him with attention in the club bathroom.

“You mean sucker sh–/ Slave to the p—y since you discovered it/ Ten bands on Chanel purse, that’s bad budgetin’/ Plus you n—as always together, it’s mad smotherin’/ You simpin’ over b—-es, I never thought it would come to this,” Cordae replies, judging — and lamenting — his friends’ actions.

“Two Tens” is not the first track that Cordae and .Paak have dropped together: The pair’s “RNP” collaboration, released in 2019, just became certified platinum.

In other Cordae news, the rapper is expecting his first child with tennis star Naomi Osaka, who announced the news on Jan. 11. “I know that I have so much to look forward to in the future,” she wrote in her Twitter announcement. “One thing I’m looking forward to is for my kid to watch one of my matches and tell someone, ‘that’s my mom,’ haha.”

Watch the video for “Two Tens” above.