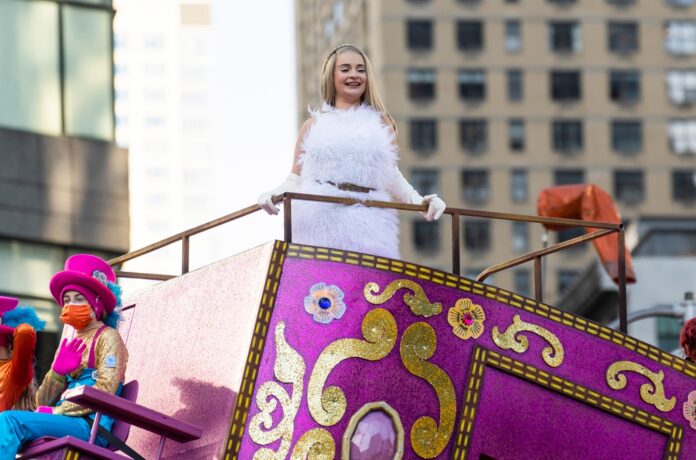 The Macy’s Thanksgiving Day Parade has been an iconic holiday event for more than 90 years, and in recent memory, it has brought some of music’s shining stars and up-and-coming acts along for the float- and balloon-filled ride.

Ahead of the 2022 parade, which features Gloria Estefan, Fitz & the Tantrums, Ziggy Marley, Joss Stone, Jordin Sparks and Betty Who, take a trip down memory lane with some big-name artists who (you may have forgotten) once graced a Thanksgiving float.

Taking a “retro ride” on a ’50s-themed diner float, then-16-year-old Duff (nearing the end of her Lizzie McGuire days) sang her classic “So Yesterday” in an oh-so-2000s outfit.

The eight-time Grammy winner was still a “teen singing sensation” when she appeared in the parade, bringing her Barbados flair to the cold streets of New York City with her breakout single “Pon de Replay.”

Of all the tunes Breezy could’ve performed from his debut self-titled album, he opted for the rather depressing ditty “Say Goodbye.” Despite the odd song choice, also on the bill that year were the Jonas Brothers, Julie Andrews, Hall & Oates and Barry Manilow, so needless to say it was a pretty stellar parade all around.

Marking her second year in the parade (and still in the pre-twerking era), Cyrus performed her song “I Thought I Lost You” from the Disney animated movie Bolt, fittingly doing so upon the float dedicated to the film.

Bringing one of the most bangin’ hits of 2009 to the Thanksgiving Day Parade, Jay Sean performed “Down” and totally owned it (and the vest he was rocking).

Who knows what enticed the Life of Pablo rapper to partake in the Thanksgiving parade festivities when he was already one of the biggest names in the rap game? But he took his My Beautiful Dark Twisted Fantasy track “Lost in the World” to the Big Apple Float.

While most parade-goers were probably hoping to hear Jepsen’s mega-hit “Call Me Maybe” as she rode on her float, she instead sang her song “This Kiss” — which still provided for plenty of head-bopping.

Although Grande’s chart-topping album Yours Truly was already out by the time of her parade appearance, she decided to bring some holiday cheer with her version of Wham!‘s “Last Christmas.” Side note: This was seemingly the breakout year for artists who have since reached superstar status, as Grande wasn’t the only now-big name on the roster: Fifth Harmony, Florida Georgia Line and Brett Eldredge were also parade performers in ’13.

A bit of a left-field addition amid pop stars like Meghan Trainor and Broadway performances, KISS brought their classic 1975 hit “Rock and Roll All Nite” the parade aboard a bare-bones float that featured nothing but the rock group and their iconic black-and-silver getups. Nothing says Thanksgiving like face paint and rock and roll.

On the cusp of the release of their career-changing album Death of a Bachelor in January 2016, Panic! at the Disco performed the celebratory DOAB single “Victorious” on a Ninja Turtle float. If only frontman Brendon Urie knew just how “victorious” the next few years would be…

In a more unconventional Macy’s Thanksgiving Day Parade performance, Gwen Stefani sang on a stage atop the Bryant Park ice-skating rink instead of upon a float going down the streets of New York City. That also meant she got to perform a full song as opposed to 45 seconds of one, which was an early Christmas gift for those Gwen stans who love her version of “White Christmas.”

Just a year before daddy got hot at the body shop, Kim Petras stopped by the family-friendly Macy’s Thanksgiving Day Parade for a G-rated performance of her bubbly pop delight “I Don’t Want It At All” with teen dance troupe Boss Kids backing her up.

Olly Murs On Track For U.K. Chart Crown With ‘Marry Me’ – Billboard