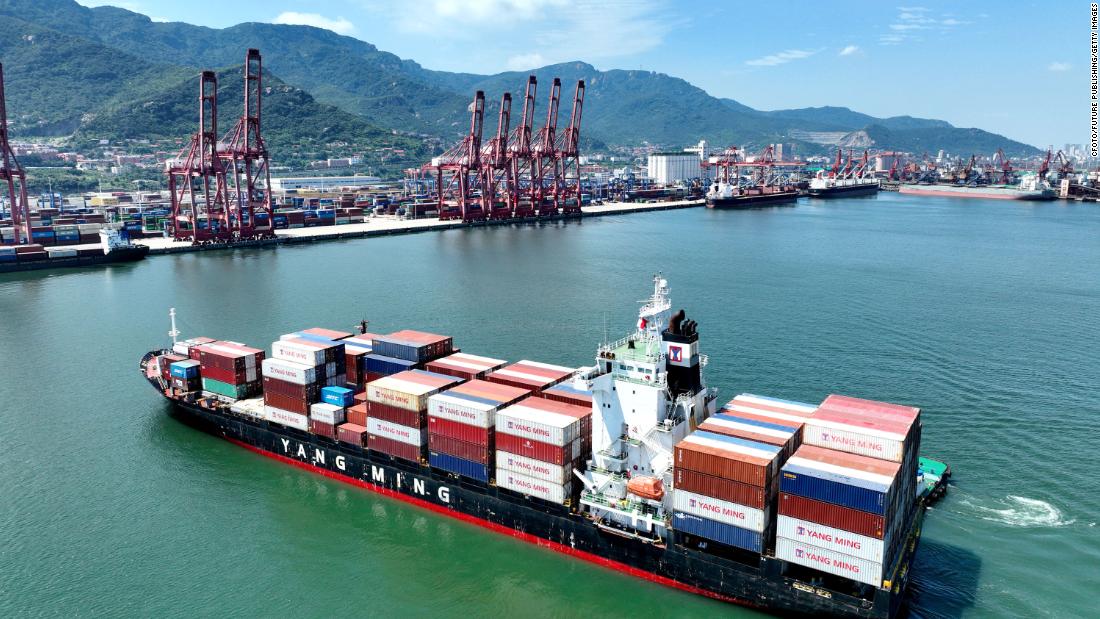 Exports measured in US dollars jumped 18% in July from a year ago, marking the fastest pace of growth this year, according to Chinese customs statistics released on Sunday. Analysts polled by Reuters had forecast a 15% increase. In June, exports increased 17.9%.

July’s strong export performance sent China’s trade surplus to a record $101 billion for the month, the first time it has surpassed the $100 billion threshold. By comparison, the trade surplus in July 2021 was just $56.6 billion.

“Despite a softening global demand backdrop, the export beat was largely driven by normalizing production activity in places like the Yangtze River Delta [region],” he said. The Yangtze River Delta, which comprises Shanghai and parts of Jiangsu and Zhejiang provinces, is a key foreign trade hub.

Activity at Shanghai, the world’s busiest container port, hit a record high in July, after the city gradually emerged from a grueling Covid lockdown that almost paralyzed its economy for months.

Strong demand from Southeast Asia, Europe, and Russia propped up the exports in July. Shipments to ASEAN countries, the European Union, and Russia soared 34%, 23% and 22% respectively last month.

The yuan has weakened 6% against US dollar so far this year, he said. A weak currency usually helps a country’s exports as goods become less expensive compared to articles priced in stronger currencies.

Hu also pointed out that China’s export price inflation is largely in line with the US CPI inflation.

“In July, about half of headline export growth is likely due to the price effect,” he said.

The stronger-than-expected resilience of the exports sector — a key driver of China’s growth — provides a boost to its economy.

China is grappling with mounting domestic challenges, including rigid Covid lockdowns, frail consumption, and a slumping housing market. It’s looking increasingly likely the economy will miss the government’s growth target of 5.5% this year.

Late last month, the country’s leadership made no mention of growth targets at a key Politburo meeting, a sign that the government thinks it might not be able to meet its goals, according to analysts.

But a resilient trade sector would help offset the broader weakness.

Exports accounted for 0.9 percentage points — or more than a third — of China’s GDP growth rate in the first half of this year, according to a commerce ministry official in July. The sector is also key to the job market as it employed 180 million people last year — about a quarter of China’s labor force.

But cooling global demand and new Covid lockdowns in China cast a shadow over the economic outlook.

“After a period of being exceptionally strong, retail sales in advanced economies have now returned to their pre-pandemic trend,” said Julian Evans-Pritchard, senior China economist at Capital Economics, in a note on Monday.

High inflation and rising interest rates also mean that demand for consumer goods is likely to weaken further in many countries, he said.

Hainan, a tropical island located in South China Sea, has imposed lockdowns on several cities since late last week as Covid cases spread. That includes Sanya, a beach resort city, where about 80,000 tourists have been stranded because of the snap lockdown.

Michigan Dearborn shooting: A suspected gunman was taken into custody after...