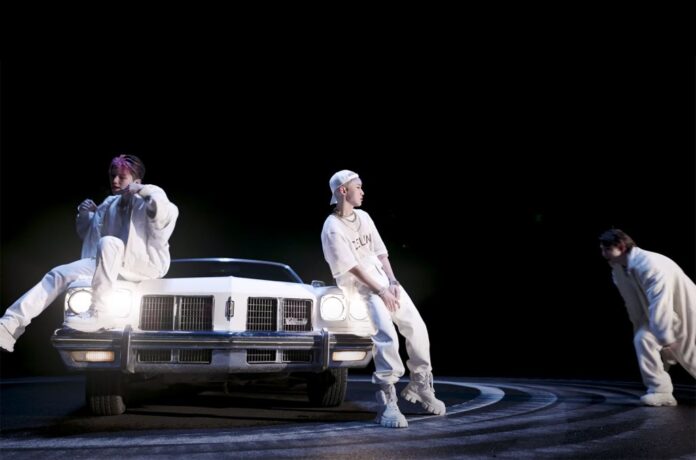 In the visual, the SEVENTEEN sub-unit — comprised of leaders S.Coups, Hoshi and Woozi — delivers high-octane choreography and plenty of swagger as they rap-sing, “I spill something out on the piano/ No kick, no snare but the rhythm’s freaky/ Everybody come with me, this ambiance, shake it/ We build a building from our basement unit.”

Later in the clip, the trio converge in a vintage car as Hoshi raps, “Yeah, yeah, 808 bass out s–t/ Yeah, yeah, the rhythm’s no problem, I’m groovin’/ Yeah, yeah, see the white supercar wheels 160 BPM speed” before S.Coups joins in to brag, “Started from two pyeong, flanked by twelve guys/ Dash on the highway, high pass zone here on out/ Ay, ay, ay, ay, no one can keep up/ Ay, ay, ay, ay, now they all follow us.”

The song marks the first time the three K-pop idols have released a single together as SVT LEADERS since “Change Up” off SEVENTEEN’s 2017 sophomore studio effort Teen, Age. “CHEERS,” meanwhile, will be included on Sector 17, the coming repackaging of the boy band’s 2022 LP Face the Sun, which is due out July 18.

Last month, SEVENTEEN earned their third career No. 1 on Billboard‘s Top Album Sales chart thanks to the success of Face the Sun, which also contained the group’s first-ever English-language single “Darl+ing.” Next month, the boy band will embark on the North American leg of their ongoing Be the Sun World Tour, beginning August 10 in Vancouver.