My Chemical Romance Levels Up With $20 Million European Tour – Billboard 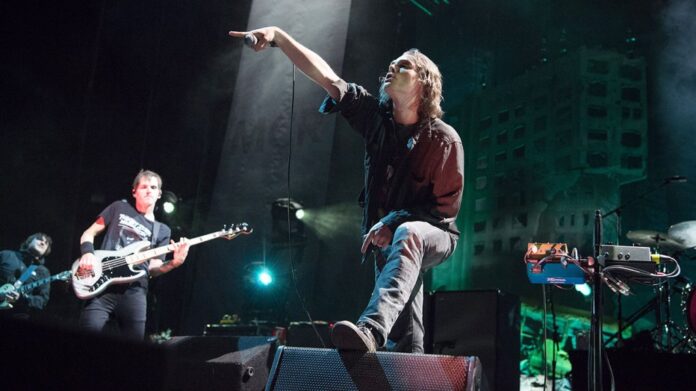 The My Chemical Romance Reunion Tour is the biggest of the rock band’s two-decade career – and it’s not even one-third the way through. Delayed from its original 2020 schedule, the trek played 21 dates in the U.K. and Europe in May and June, wrapping its first leg on June 18 with $21.1 million and 277,000 tickets sold, according to figures reported to Billboard Boxscore.

The My Chemical Romance Reunion Tour will resume in Oklahoma City in Aug. 20, playing about 40 dates in North America and Oceania through March 2023, including five shows each in the New York and Los Angeles areas. Billboard Boxscore estimates that the trek’s final gross should $60 million.

While the Milton Keynes three-night extravaganza was an outlier as a stadium stop, the tour maintained an average of $1 million and 13,209 tickets per night. That easily makes it the biggest tour of the band’s career so far, outpacing 2011’s $491,000 by a margin of more than two-to-one.

But even those figures accounted for the co-headline strength of blink-182 on the branded Honda Civic Tour. As a “solo” headliner, their previous best was $183,600 and 5,415 tickets on 2007-08’s The Black Parade World Tour, amounting to less than one fifth of the 2022 tour’s running nightly earnings.

MCR’s reunion high doesn’t simply build on their mid-‘00s goodwill, it regains (and then some) momentum following a mid-career dip followed by an extended hiatus. The band’s last headline tour, The World Contamination Tour (2010-12) saw nightly grosses and attendance drop by 27% (to $136,000) and 37% (to 3,392 tickets), respectively.

MCR joins a post-COVID touring landscape that has been busy, to say the least. Not only have reliable road-warriors like The Rolling Stones, Paul McCartney and the Eagles returned to glory, but younger artists have hit new heights after the two-year break. Billie Eilish, Harry Styles, Dua Lipa and Kacey Musgraves are some of the newest arena Boxscore stars, reaping career-high grosses on the back of pandemic-era Grammy wins and chart-topping singles.

My Chemical Romance is its own case entirely. After the downward momentum of The World Contamination Tour and its centerpiece album (2010’s Danger Days: The True Lives of the Fabulous Killjoys peaked at No. 8 on the Billboard 200 and none of its songs hit the top 50 of the Billboard Hot 100; 2006’s The Black Parade hit No. 2 and sent “Welcome to the Black Parade” to No. 9), the band went mostly silent, with the minor exceptions of a couple compilation albums featuring scattered new tracks.

For about a decade, MCR did not release any noteworthy new music, nor did they tour the festival circuit, open a branded theme park, or inspire a viral TikTok dance challenge. Time and pure word of mouth combined to transform them from a leader of their particularly mid-to-late 2000s “scene” into a global arena headliners.

My Chemical Romance found mainstream success on Myspace and MTV with late-period Total Request Live hits “Helena” and “Welcome to the Black Parade,” blending emo, glam, pop and punk alongside rock bands like Fall Out Boy, Panic! At the Disco and Paramore. But despite being more than a decade removed from their last Hot 100 hit, the timing of their return also helps nudge them into the biggest venues they’ve played. They went on hiatus as one of the last bands standing in a fading scene but have returned with guitars back on Top 40 radio and nostalgia sending everyone from Nirvana to Kate Bush back to the top of the charts.

In addition to a sold-out one-off at Los Angeles’ Shrine Expo Hall in December 2019 and a top 10 welcome on multiple Billboard rock charts for comeback single, “The Foundations of Decay,” heightened anticipation and fan-grown mythology around MCR has sent them back to the stage as a completely different touring entity than in their original run. While The Black Parade World Tour and The World Contamination Tour oscillated between theaters and clubs (plus arenas in select major markets) at around 80% capacity, the ’22 reunion tour sold more than 90% of tickets in European arenas and stadiums.