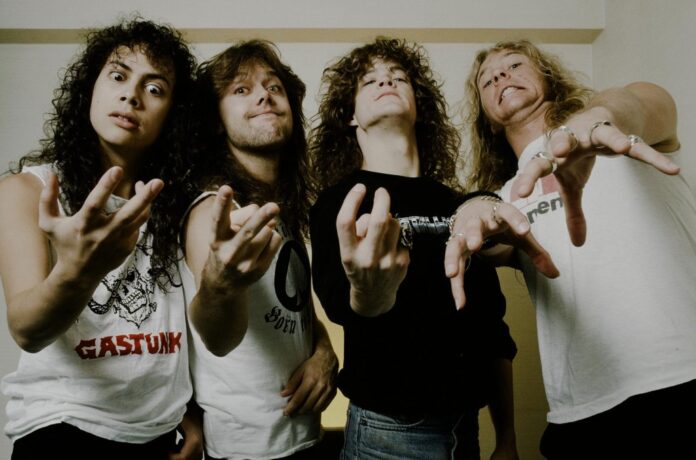 Welcome to Billboard Pro’s Trending Up newsletter, where we take a closer look at the songs, artists, curiosities and trends that have caught the music industry’s attention. Some have come out of nowhere, others have taken months to catch on, and all of them could become ubiquitous in the blink of a TikTok clip.  This week: It’s Metallica’s turn for a Stranger Things boost, while Usher gets a Twitter-accelerated NPR bump and Cole Swindell’s callback to a Jo Dee Messina classic proves mutually beneficial.

Last month, the first installment of Stranger Things’ fourth season helped Kate Bush’s “Running Up That Hill (A Deal With God)” soar back onto the Billboard Hot 100, as the prominent placement in Netflix’s ’80s-set sci-fi smash helped Bush’s 1985 hit crack the top 10 of the chart for the first time. Ahead of the season’s final two episodes arriving on July 1, it was worth wondering: which ’80s song could snag the big Stranger Things sync this time, and receive a “Hill”-sized revival?

The answer so far has been “Master of Puppets,” Metallica’s 1986 thrash classic, which is used during a pivotal sequence in the season finale involving lovable metalhead Eddie Munson (Joseph Quinn), demonic bats and a righteous performance atop an alternate-universe trailer home. “Puppets” has exploded on streaming platforms as a result — it’s climbed into the top 10 on iTunes and Spotify’s U.S. daily chart — and its daily on-demand U.S. audio streams have grown nearly 400% from 224,000 last Thursday (June 30), the day before the new Stranger Things episodes were released, to 1.11 million streams on Sunday (July 3), according to Luminate.

Time will tell if that streaming surge will be great enough to launch “Puppets” onto next week’s Hot 100 – which would mark Metallica’s first appearance on the chart since “The Day That Never Comes” reached No. 31 in 2008. And unlike Bush’s “Running Up That Hill,” which peaked at No. 30 in 1985 prior to its Stranger Things renaissance, “Puppets” has never placed on the Hot 100 — if it does, Metallica would have their 17th career entry on the tally. – JASON LIPSHUTZ

More Upticks From the Upside Down

“Master of Puppets” isn’t the only Stranger Things synch from the final two episodes of its fourth season to receive newfound interest on streaming. Journey’s “Separate Ways (Worlds Apart),” which plays during the end of episode 8, has nearly doubled its daily U.S. on-demand audio streams since the new episodes came out, from 246,000 last Thursday to 480,000 on Sunday, according to Luminate. Meanwhile, Siouxsie & The Banshees’ “Spellbound,” which plays during the closing credits, is up from 11,000 to 55,000 daily streams, while Moby’s “When It’s Cold I’d Like To Die” — a song from 1995, but used in the 1986-set Stranger Things season nonetheless — rises from 5,000 to 52,000 daily streams.

Yet the biggest music story from the new Stranger Things episodes may be the same one from a month ago: “Running Up That Hill.” Although Bush’s single is not as prominently featured in the final two episodes of season 4, it still pops up in bits and pieces as the theme song of Max Mayfield (Sadie Sink) — and that may be enough to push it even higher up the Hot 100 chart, where it’s peaked at No. 4 thus far. “Hill” is up in daily streams (from 2.4 million on Thursday to nearly 2.8 million on Sunday) and daily sales (from 1,600 to 2,600), At radio, the song leaps from No. 47 to No. 33 on the July 9-dated Radio Songs chart, up 58% to 20.5 million all-format audience (June 24-30). Interest in “Hill” remains high across the board — but with a much greater radio base compared to where the song was a month ago, Bush could be eying a new career Hot 100 peak. – JL

Veteran pop and R&B superstar Usher had one of the most anticipated recent entries in NPR’s Tiny Desk video performance series last week, performing a number of classic hits and fan favorites with his backing band (including fellow R&B fixtures Eric Bellinger and Vedo on backing vocals). The video was a big hit, racking up 4.6 million views on YouTube since its Thursday (Jun 30) debut — and driving excitement about his new also spawning one of the most unavoidable memes of Fourth of July weekend, via a clip of a locked-in Usher whispering “watch this” in the intro to his 2004 Hot 100-topper “Confessions Part II,” which even government officials were using by this Tuesday.

Unsurprisingly, “Confessions” saw considerable streaming gains thanks to its Tiny Desk feature and meme ubiquity, rising from 180,000 streams on the Wednesday before the concert (June 29) to 267,000 the Friday immediately after (July 1), a 48% lift, according to Luminate. But Usher’s biggest Tiny Desk bump was reserved for “Superstar,” a Confessions fan favorite also performed on the set, which exploded from 111,000 streams last Wednesday to 375,000 that Friday, a 238% gain. On the whole over that timespan, total streams for Usher’s catalog rose from 4.1 million to 5.6 million — a not-so-tiny bump for the enduring hitmaker. – ANDREW UNTERBERGER

In a country era where streaming success is increasingly divorced from radio approval, one of the genre’s most reliable recent hitmakers appears to have a runaway smash in both formats. Cole Swindell, the Georgia singer-songwriter who’s topped Billboard’s Country Airplay chart with his last three official singles, may be headed for a fourth straight with “She Had Me at Heads Carolina,” which sits at No. 26 this week in its fourth frame on the listing. But its streaming velocity is even more impressive: The song rises 43% in on-demand streams week-over-week, according to Luminate, up to over 8 million streams in the tracking week ending June 30. The combination propels its huge jump on the Hot 100, where it moves from 76-38 in its fifth week on the chart.

The song has proven such a quick listener favorite that it’s also provided a nice tailwind for the classic country hit it prominently references and interpolates: Jo Dee Messina’s 1996 No. 2-peaking Country Airplay hit “Heads Carolina, Tails California.” In the five full tracking weeks since Swindell’s latest single was officially sent to radio (May 24), Messina’s song has risen from 963,000 to 1.2 million weekly streams – a 26% gain. – AU

As someone working in the festival space, how different has your general experience like in 2022 compared to previous years?

My biggest overall observation is that everything costs more and audience numbers are not where they were pre-pandemic. There are all the obvious reasons like gas prices and labor shortages, and then there are the more subtle and still to be determined ones, like population shifts from cities, and the cultural shifts of things like people not having socialized or gathered in large numbers in two years, and during that time period started turning to digital platforms at home for music and cultural offerings. There is more competition than ever, as everyone wants to get back to work. I think it will take a few years to find the new normal of what the landscape is and adjust accordingly, so I am trying to take all of it in stride and be grateful to have SummerStage shows this summer across New York City.

What’s been the biggest surprise about putting together this year’s SummerStage?

After producing a large festival for nearly 20 years, the biggest thing I have noticed is that people, myself included, don’t have the endurance that we had before the pandemic – meaning what we did effortlessly, back-to-back SummerStage shows, for three-plus months feels different now, and harder to an extent.

This year’s SummerStage is a full-season comeback, across 12 local community parks and five boroughs. How difficult was it to coordinate a return on that scale?

We are in all five boroughs for the first time since 2019, and that is a great feeling! Especially for a festival that intentionally serves all New Yorkers, and in their communities. The logistics at Capital One City Parks Foundation SummerStage are not so different from 2019, it’s a lot of work but we are good at it and make it happen, and we are very lucky to have a great team in place.

What is different is that it’s been two years and we are essentially relaunching a festival across the five boroughs for the first time since 2019. In some cases, we are in new locations, too. It feels to me like starting over, and it will be a few years of consistent programming for the local neighborhood communities to be aware of our events, and for people to come out as they have in the past.

Trending Back Then: The Hot 100 Gets ‘Back’ to the Northwest

By summer 1992, Nirvana had topped the Billboard 200 albums chart with their game-changing Nevermind album, Pearl Jam were on their way to rock superstardom with their eventually RIAA-certified Diamond-selling Ten album, grunge fashion had started to infiltrate the culture and the Seattle-set, grunge-soundtracked rom-com Singles was due for release in September. So of course, the first Seattle-based artist of the decade to top the Hot 100 was… Sir Mix-a-Lot, the veteran underground rapper who crossed over in the biggest way with his posterior-celebrating 1992 anthem “Baby Got Back.”

The single – which marked hip-hop’s just third-ever visit to the chart’s pole position – took over MTV with its larger-than-life video and pop culture with its forever-quotable lyrics, interrupting the grunge takeover with a less-rainy warm-weather banger. Sir Mix-a-Lot never returned to the Hot 100’s top spot afterwards, but neither did any other Seattle act – until two decades later, when another cult favorite rap act found wild top 40 success. – AU