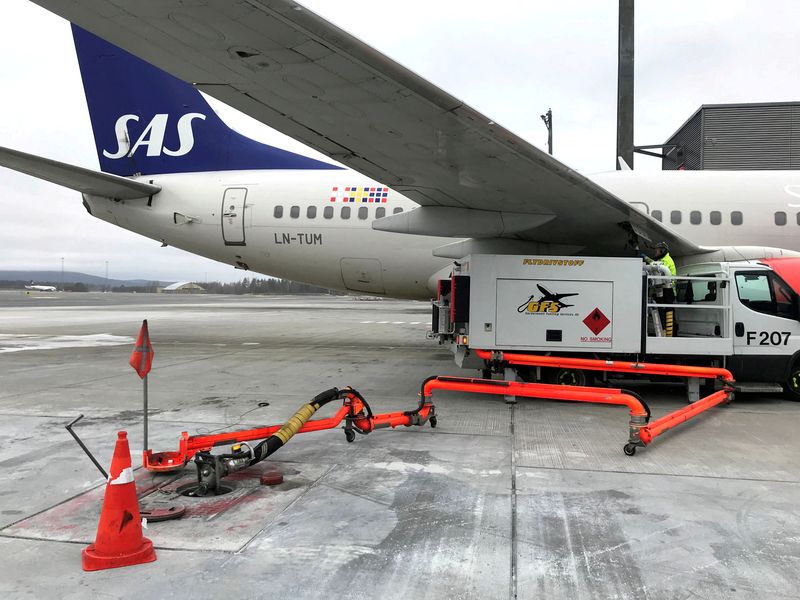 COPENHAGEN (Reuters) – Swedish loss-making airline SAS is fighting for survival, the latest carrier to hit financial straits due to hefty debts, stiff competition and soaring costs, even as the travel industry recovers from the pandemic.

SAS has said a restructuring plan announced in February depends on it raising 9.5 billion Swedish crowns ($946 million)in cash and converting 20 billion crowns of debt to equity.

Many governments across the world helped shore up their national carriers during the pandemic. But Sweden and Denmark, which both have 21.8% stakes in SAS, are taking very different approaches to the Scandinavian brand.

Denmark has said it is willing to increase its ownership and write off debt, but Sweden has refused to inject more money.

WHY DOES SAS MATTER SO MUCH TO DENMARK?

SAS AB, formally known as Scandinavian Airlines System Denmark – Norway – Sweden, is headquartered in Stockholm, but it uses Copenhagen Airport, the largest in Scandinavia, as its main hub.

Denmark’s Finance Minister Nicolai Wammen has said SAS is important for the Danish economy and ensuring good travel connections from the Nordic country to the rest of Europe as well as long-distance flights to other continents.

SAS directly employs almost 7,000 people, equally shared between Denmark, Sweden and Norway. Prior to the COVID-19 pandemic, the company underpinned 20,000 jobs in the Scandinavian region, 6,800 of those in Denmark, according to a 2019 report by Copenhagen Economics commissioned by SAS.

SAS accounted for almost a third of direct and indirect flights to Denmark, according to the report. It also accounted for 82% of transfer air traffic at Copenhagen airport in 2017.

To Danes, SAS has traditionally been linked to a sense of pride and even a collective sense of ownership as it evolved to become a leading premium carrier in the decades following its creation in 1946.

WHAT HAS GONE WRONG?

At its height in the 1980s, SAS was named the world’s best airline by an industry group. But with the emergence of low-cost rivals such as Ryanair things began to change.

The company has been in nearly constant financial trouble since the turn of the century, and last year lost 6.5 billion Swedish crowns ($638 million), with revenue just a third of pre-pandemic levels.

On consumer review site Trustpilot, SAS is rated 1.5 out of five stars, just above Ryanair’s 1.4.

Adding to SAS’ trouble, some 1,000 SAS pilots in Denmark, Norway and Sweden plan to go on strike on June 29 over disagreements over wages and cost-cutting plans.

WHAT DOES DENMARK WANT?

Denmark’s parliament agreed this month to write off some of SAS’ debt and convert some more into equity, as well as to inject new cash. That could increase Copenhagen’s stake in the airline to up to 30%.

But the government has made it a condition of the cash injection that SAS gets private investors to participate too.

IS THIS A PROBLEM?

While the Danish government has promised to stay out of day-to-day business, it wants to protect its interests.

Denmark wants “influence over the elements in SAS that are central to maintaining SAS’ strong foothold in Denmark and contribution to Denmark’s international accessibility,” the finance ministry said this month.

That may deter large investors and consortia that might have been interested in making sweeping changes at SAS, according to Sydbank analyst Jacob Pedersen.

WHAT IS SWEDEN DOING?

Sweden, which has already injected more than 8 billion Swedish crowns into SAS over recent decades, has taken a harder line on new financing.

Stockholm said this month it would not provide new cash to SAS, though it approved the debt-for-equity plan.

If the airline does raise new equity, this will reduce Sweden’s stake. The country has said it wants to exit SAS completely in the long term.

Neighbouring Norway’s government sold its remaining 10% stake in SAS in 2018, arguing there was no need for the state to own airline stocks.

Still, it is a major creditor with 1.5 billion Norwegian crowns ($153 million) in loans made during the pandemic.

On Tuesday, Oslo said it would support SAS’ debt-to-equity plan, under certain conditions, but did not plan to remain a long-term stakeholder.

Ether holds its breath for the lean, mean ‘merge’ By Reuters