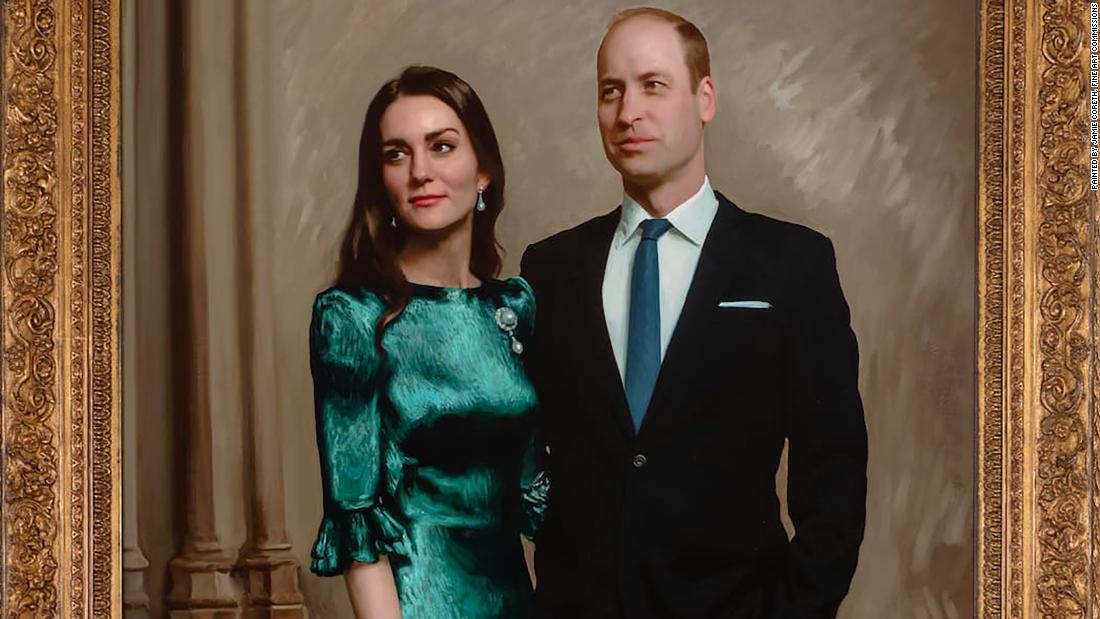 The first official joint portrait of the Duke and Duchess of Cambridge has been revealed to the public at the Fitzwilliam Museum in Cambridge, England.
The Duke and Duchess visited Cambridge on Thursday to see the 210 centimeter by 110 centimeter oil painting, crafted by British artist Jamie Coreth. The portrait shows the couple gazing into the distance, Prince William in a dark suit and blue tie and Kate wearing an emerald green dress from indie brand The Vampire’s Wife, which the Duchess previously wore on a trip to Dublin in 2020. The dress, designed by musician Nick Cave’s wife Susie Cave, was described by British Vogue as a major turning point in Kate’s style.

The painting was commissioned in 2021 by the Cambridgeshire Royal Portrait Fund, according to the Fitzwilliam Museum. Coreth incorporated Cambridge itself into the portrait, choosing background tones and a hexagonal architectural motif inspired by buildings across the city, the museum noted in a statement. The region is the namesake for the pair’s titles, which were granted to them by Queen Elizabeth II on the day of their wedding in 2011.

The painting will be on show at the Fitzwilliam for three years and then loaned to the National Portrait Gallery in London in 2023 to mark that institution’s reopening.

“Delighted to see this new portrait unveiled at the @FitzMuseum_UK in Cambridge today!” read a post on the official Twitter account for the Duke and Duchess of Cambridge.

During their visit, Kate and William met with Coreth, supporters of the project, and Sibyl Marshall, the wife of the late Sir Michael Marshall, who originally proposed the idea for the portrait, according to the Fitzwilliam Museum.

Coreth described the experience of painting the portrait as “the most extraordinary privilege of my life” in the museum’s statement.

Prince William, Duke of Cambridge and Catherine, Duchess of Cambridge visit Fitzwilliam Museum Cambridge where the royal couple viewed a portrait of of themselves painted by artist Jamie Coreth during an official visit to Cambridgeshire on June 23, 2022 in Cambridge, England. Credit: Paul Edwards/WPA Pool/Getty Images

“I wanted to show Their Royal Highnesses in a manner where they appeared both relaxed and approachable, as well as elegant and dignified,” Coreth said in the statement.

“As it is the first portrait to depict them together, and specifically during their time as The Duke and Duchess of Cambridge, I wanted the image to evoke a feeling of balance between their public and private lives. The piece was commissioned as a gift for the people of Cambridgeshire, and I hope they will enjoy it as much as I have enjoyed creating it,” the artist said.