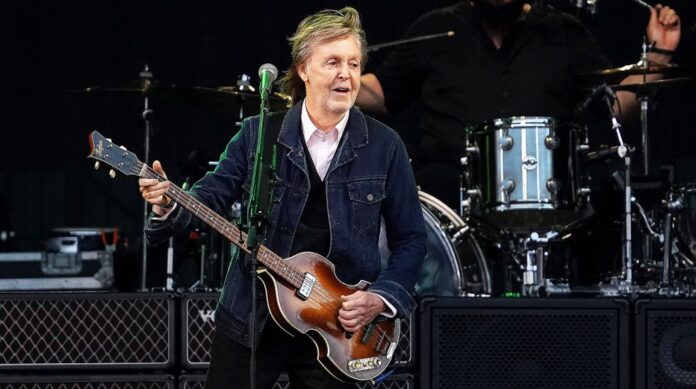 After a notably young and diverse group of tours – highlighted by Bad Bunny and BTS – led the way on the 2022 mid-year Boxscore charts, classic rock elder statesman Paul McCartney finishes at No. 1 on Billboard’s Top Tours chart for May. According to figures reported to Billboard Boxscore, McCartney earned $52.4 million and sold 206,000 tickets across nine shows throughout the month.

The May dates of the Got Back Tour alternated between arenas (Seattle’s Climate Pledge Arena, Dallas’ Dickies Arena) and stadiums (Inglewood’s Sofi Stadium, Orlando’s Camping World Stadium), reaching a single-night $12 million high in Inglewood. The lofty total is good for the No. 2 spot on the Top Boxscores ranking.

Macca’s two single-night arena stints in Knoxville, Tenn. and Dallas lurk at Nos. 21 and 26, respectively. It’s his first month at No. 1 on Top Tours, after reaching as high as No. 3 in June 2019, behind the Spice Girls and Ed Sheeran.

Beyond the month’s top 10 acts, classic rock blankets the Top Tours chart, with Pearl Jam and Elton John at Nos. 11-12, and the Eagles, Queen + Adam Lambert, The Who and KISS throughout the ranking with spotted reporting.

After his May 31 show at the Thompson-Boling Arena in Knoxville, Tenn., McCartney’s total reported career gross shot just $100k north of the $1 billion mark, making him one of just 11 artists to surpass the 10-digit mark in Boxscore’s 30-year-plus history.

As Billboard reported last week, McCartney joins the billion-dollar club alongside Coldplay, both hitting the benchmark within eight days of one another. Other club members including The Rolling Stones, Elton John, the Eagles and Kenny Chesney are also on the road this summer, competing in stadiums worldwide.

Including the opening show in April and five additional dates in June, the Got Back Tour wrapped with $101.7 million and 416,000 tickets in just fifteen shows.

Justin Bieber and Coldplay follow at Nos. 2-3 with monthly earnings of $32.3 million and 31.9 million, respectively.

For Bieber’s part, the Canadian popstar finished with $18.6 million and 118,000 tickets from nine U.S. shows and then $13.7 million and 157,000 tickets from four dates in Mexico. His dip into Latin America is up 4% from his last quartet of Mexican shows in February 2017 on the Purpose World Tour.

Coldplay may or may not fit the definition of classic rock but they do join McCartney as a British pop-rock stadium act in this month’s top 10. Their first batch of American dates in five years sold 306,000 tickets, generating more sales than McCartney or Bieber, but slightly fewer than fellow Brit Ed Sheeran.

Sheeran takes top honors for attendance in May with 321,000 tickets sold, but lands at No. 4 on the Top Tours chart with a $26.4 million gross. But despite not taking the No. 1 spot, he rules over the Top Boxscores tally with three shows at the Principality Stadium in Cardiff, Wales. Those dates earned a combined $15 million on May 26-28.

Sheeran’s is one of four international engagements to land among the month’s top 10 Boxscores. Behind McCartney’s L.A.-area concert, Maroon 5 is No. 3 with a double-header at HaYarkon Park in Tel Aviv. The rare Israeli report grossed $11.7 million and sold 98,000 tickets on May 9-10, helping the pop-rock stalwarts get to No. 9 on Top Tours.

At No. 5 is New Jersey-bred emo-glam-rock outfit My Chemical Romance. The band’s comeback tour opened in the U.K. and included three shows at Stadium MK in Milton Keynes, earning $8.9 million from over 90,000 tickets sold. Altogether, the tour’s first 11 shows earned $15.5 million, positioning them at No. 7 on Top Tours. After hitting Europe in June, the band will travel stateside for two months of shows in North America this fall.