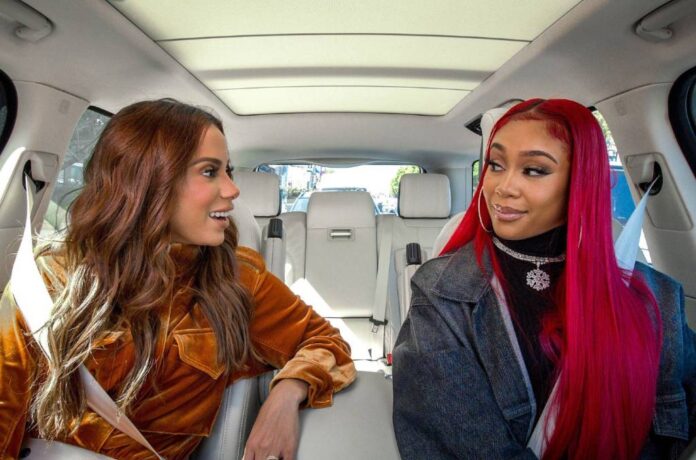 Anitta and Saweetie are guests on the new season of James Corden’s Carpool Karaoke: The Series on Apple TV+, which premieres Friday (May 27). In an exclusive clip the streaming service is sharing exclusively with Billboard, the two artists are using their time in the vehicle to engage in hilarious language lessons in the Brazilian singer’s native Portuguese.

The video kicks off with the rapper telling Anitta, “You got a sexy voice, though. Portuguese is sexy.” As it turns out, Anitta has heard comments similar to Saweetie’s multiple times, and decided to teach the “Icy Girl” some Portuguese phrases to sound like a Brazilian.

“You think Portuguese is sexy? Everyone says that. Portuguese is a very sexy language,” Anitta told the rapper. “I’ll prove it for you — you wanna see? I’m gonna tell you some phrases in Portuguese in a very sexy way, and then I’ll be telling you the translation in English.”

With a set of vocabulary cards at the ready, Anitta shared the first phrase –“Eu tenho azia” — which Saweetie repeated in a sensual tone. The English translation of the phrase? “I have heartburn.”

The second phrase, “meu pé ta fedendo,” was even worse. After Anitta revealed that it means “my feet stink,” Saweetie was both grossed out and amused, and burst into fits of laughter. “Alright, give me something actually sexy to say,” she asked the Brazilian singer, who launched into another gross phrase: “Sorry, my pimple popped while we were kissing.”

Watch Anitta and Saweetie have fun with translations in Carpool Karaoke: The Series above.

The fifth season of the Emmy-winning show kicks off Friday, May 27, on Apple TV+. In addition to Saweetie and Anitta, the latest round of guests includes Zooey Deschanel and Jonathan Scott; Simu Liu and Jessica Henwick; White Lotus stars Murray Bartlett, Alexandra Daddario and Sydney Sweeney; and more.