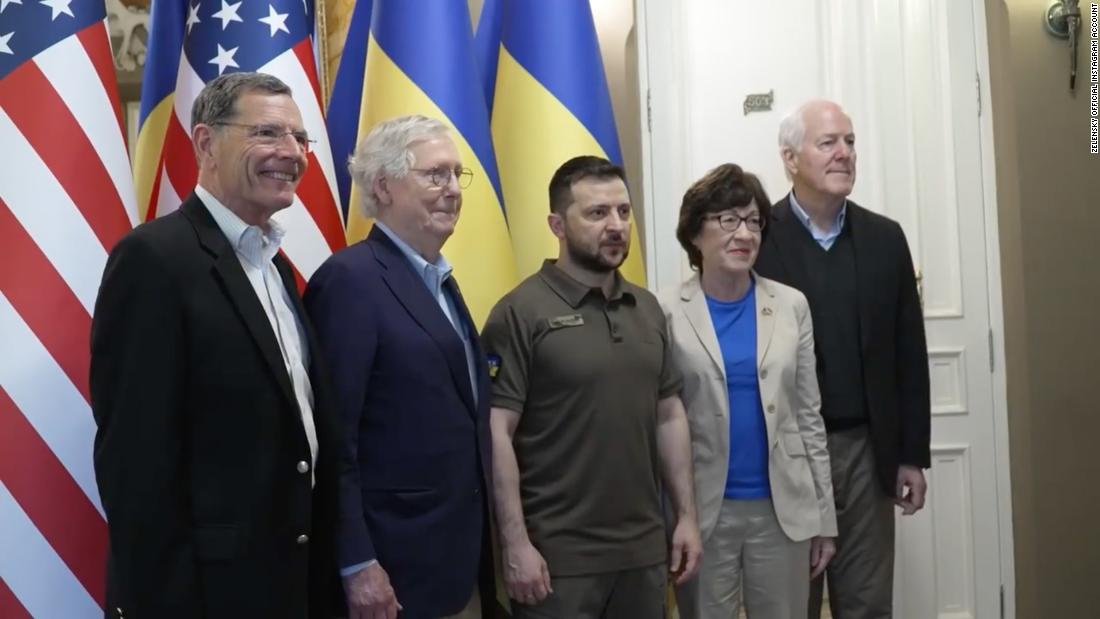 Zelensky said on his Instagram account that the visit “is a strong signal of bipartisan support for Ukraine from the United States Congress and the American people.”

He added: “Thank you for your leadership in helping us in our struggle not only for our country, but also for democratic values and freedoms. We really appreciate it.”

It’s unclear whether the meeting took place Saturday and whether the delegation is still in the Ukrainian capital.

McConnell and the other senators are the latest US officials to visit Ukraine since Russia invaded the eastern European nation in late February. Two weeks ago, House Speaker Nancy Pelosi led the first congressional delegation to Ukraine since war broke out. Pelosi, joined by several senior House Democrats, met with Zelensky in Kyiv.
First lady Jill Biden met last weekend with Ukrainian first lady Olena Zelenska in Uzhhorod at the Slovakian border at a converted school that now serves as temporary housing for displaced citizens. US Secretary of State Antony Blinken and Defense Secretary Lloyd Austin met with Zelensky in Kyiv last month.
Congress has been in the process of trying to pass a roughly $40 billion aid bill that would provide Ukraine with military and humanitarian assistance. In a rare show of unity, McConnell and Senate Majority Leader Chuck Schumer pushed for swift passage of the bill this week, after the House had advanced the measure in a bipartisan vote. That Senate effort, however, was blocked Thursday by GOP Sen. Rand Paul of Kentucky who has demanded changes to the legislation. The Senate is now expected to pass the bill sometime next week, with Schumer forced to take procedural steps to overcome Paul’s objection, before sending it to President Joe Biden’s desk.

This story has been updated with additional details.

The ‘worst’ drivers in Europe revealed

Why does China want to shoot down the Elon Musk Starlink...