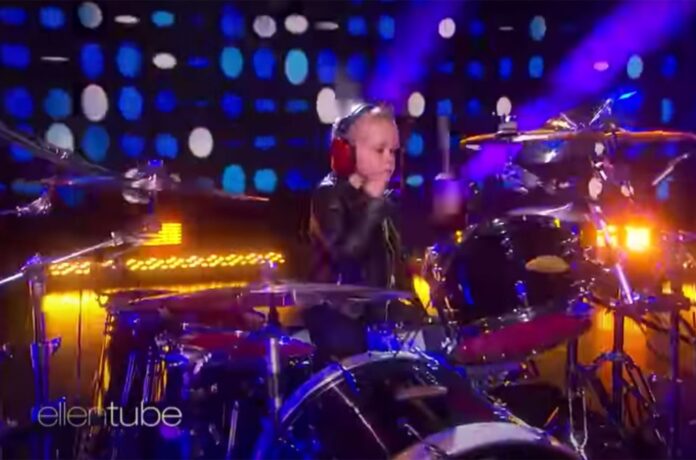 Before sitting down with the host, Hayes took a seat at an in-house drum set to to deliver a pounding cover of Slipknot‘s 2009 single “Sulfur” from their fourth album, All Hope Is Gone. After giving the drum cover his all, Hayes — outfitted in a black leather jacket, graphic T-shirt, skinny jeans and Vans sneakers — made his way over to chat with DeGeneres, who asked him about how he got into drumming at his young age.

“I’ve been drumming since I was 2 years old,” he said. “My dad [played drums], he taught me a little bit but not everything.” DeGeneres then asked, “So you’re saying you’re better than your dad?” to which Hayes replied, “Yeah.”

The 7-year-old then shed some light on his passion for heavy metal music. “I listened to some heavy metal music and I just got into it all,” he said. “I went like, ‘Yeah, I’m gonna listen to this all the time,’” he said, adding that his father helped get him interested in the genre and that his “number one” favorite band is Slipknot.

At the end of the segment, DeGeneres surprised Hayes with a drum kit piece that he has been saving up his money for: a 48ply Signature Snare Drum designed by Slipknot drummer Jay Weinberg, an addition that retails for $1,649.99.